I rarely get a chance to visit another 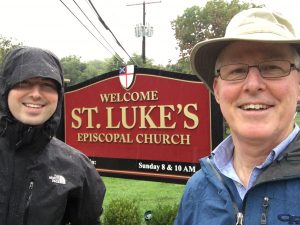 church on Sunday, so when I’m on vacation I try to worship at a local Episcopal Church. This week Katy and I are visiting our son and daughter in law in Washington, DC, so today my son Chad and I visited St. Luke’s Episcopal Church in Bethesda, MD.

How did I choose this church to visit? Like everyone else, I checked out the local Episcopal churches on Google. I tried to get the feel of each church by looking at the photos on the website, by trying to get a sense of the values of the church implied in what what presented and what was not presented, and by reading about the leadership.

I chose St. Luke’s because I thought it might be a Church my son would return to. On its website, it looks airy and modern with an upbeat, contemporary feel.

We weren’t disappointed. The liturgy was fresh and inclusive. There was an emphasis on openness and welcome, regardless of your belief or lack of belief. The priest was a youngish woman who was clearly tuned into her congregation. Her sermon was interactive, with the parishioners chiming in to answer her questions. They weren’t shy about it, and obviously trusted her.

The sermon asked the question, “How can we be more open to change?” This question was asked because Jesus was open-minded enough to change his mind when the Syro-Phoenician woman challenged him to heal her daughter. “Even the dogs eat the crumbs that fall from the children’s table.” As part of the sermon, a young girl read the lesson, which I thought was quite charming.

The choir was quite accomplished, and did a nice job of singing the Psalm. They were arranged in a circle in front of the chancel, with a grand piano, trombone, tuba and trumpet as accompanists. The congregational singing was adequate, but less impressive.

The peace was quite long, with many people exchanging greetings. We were expressly welcomed and invited to come again. These people obviously enjoy being together. There was a nice mix of young and old, and there was some racial diversity present. About twenty children went up to the altar at the end of the service for the blessing of their school backpacks.

At Communion, a group of people was ushered up to surround the chancel and we received the rice wafer and wine as a group before we went back to the pews. I liked that.

Much of the liturgy used inclusive and expansive language. I missed the lofty language of the Prayer Book, but appreciated their effort to include everyone. We briefly attended the coffee hour, but decided to stop by Starbucks on the way home, so we departed through the rain. All in all, a good Sunday morning.

Stewardship Dinner October 21, 2021 Bishop Greg Rickel will speak at our stewardship dinner on Thursday, October 21. Please bring a potluck dish and RSVP to the church office by October 16.

Outreach - Get involved. Make a ditty bag for Mission to Seafarers. Ditty bags provide essential items for professional seafarers who visit the Port of Seattle.